Experience the all-natural energy boost with Modere Energy Shot. This nutritiously delicious energy supplement can provide a burst of energy to support your active lifestyle every day without the adverse effects that usually come with traditional energy drinks.

Let’s find out the limitless benefits that Modere Energy Shot offers and the ingredients that make it a super active energy booster. 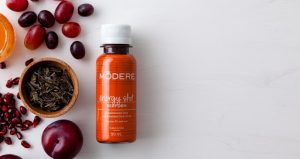 Modere Energy Shot is a dietary supplement that boosts the energy levels without the sudden crash that most energy drinks cause after the energy-boosting effect fades out.

This product offers clean and organic energy from natural fruit juice blends that not only boost the energy levels but also provide a bunch of health benefits.

Modere Energy Shot provides a long-lasting and clean burst of energy with the power of natural caffeine from green tea leaf extract to support your active lifestyle. Modere Energy Shot is much better than other energy supplements in the market, as the energy boost it provides does not transform into crashing after doing physical activities.

Modere Energy Shot is also perfect for those who boost their productivity and creativity while studying or working. This product enhances the cognitive functions with the power of natural caffeine from green tea leaf extract.

Modere Energy Shot supports the body’s thermogenic process by boosting the metabolism. As a result, the body will burn more calories to accelerate the weight loss process.

Modere Energy Shot is not only limited in boosting the energy levels, as it also provides additional antioxidant protection that can slow the effects of aging. Antioxidants are known to fight free radicals that damage the cells with oxidative stress.

This blend contains nutritious juices from pear, apple, red grape, white grape, plum, purple grape, apricot, blueberry, kiwi, and pomegranate. It is filled with antioxidants, essential nutrients, and minerals that can support the overall health and slow the effects of aging.

This type of tea can regulate cholesterol levels, lower the risk of heart diseases and stroke, prevent the growth of cancer cells, and improve cognitive functions.

What do people say about Modere Energy Shot?

Let’s take a look at some testimonials from the people who already experienced the clean burst of energy and extraordinary health benefits from Modere Energy Shot.

“Absolutely love the clarity it gives. You don’t get a jittery feeling, just a ‘ready to conquer the day’ feeling.”

“I can’t believe how great this works. I have energy throughout the day and then sleep like a baby at night.”

Support your active lifestyle and improve your overall health with Modere Energy Shot, which you can avail only on Modere Website.

You can also include Modere Rush, and Modere Mineral Supplement to unleash the healthiest version of you.

There are many ways of earning money, but there is nothing better than the opportunity that Modere gives. Discover an efficient way of earning by becoming a Modere product distributor. Introduction to Modere Modere is a U.S.-based company that focuses on delivering...
Read More

Modere Probiotic Review: The Revolutionary Gut Friend That You Need!

If you haven’t taken a step toward taking better care of your gut, then you should really consider putting it at the top priority and here’s why: Your gut health- as much as it affects your immune, cardiovascular, and digestive systems- plays a huge role in your...
Read More

Take care of your eyes by popping two capsules of Modere Eye Health per day. With its careful blend of vitamins and extracts, this food supplement will help you protect your eyes from fatigue, digital blue lights, and other harmful elements. What is Modere Eye Health?...
Read More

Modere offers a lot of great products that can improve your overall health and well-being. But there are always the best of their kind, so we listed them down to help you choose the ones that best suit your lifestyle. Here are the top four Modere products that you...
Read More

Modere as a Part of your Daily Routine

Behind The Company Modere has been in the industry for 30 years, committed to providing innovative products using biodegradable formula. The company is known for its "clean label alternative," which ensures that the ingredients that it uses are BPA Free, meaning that...
Read More

Staying at home is not an excuse to abandon your diet and exercise plan. While reaching out for that oh-so-accessible tub of ice cream while binge-watching that show everyone is talking about may seem the only way to keep your sanity intact, experts still...
Read More

Your skincare routine might be great, but does it have the additional benefits and protection that Modere Personal Care products offer? Discover the benefits and secrets of Modere’s remarkable skincare products to see the advantages of Modere skin health....
Read More

Enjoy smoother bowel movement, overall digestive health, and other significant results with a daily dose of Modere Fiber. With this easy-to-take supplement by your side, you’ll have all the nutritious, dietary fiber you’ll need. What is Modere Fiber? Modere Fiber is a...
Read More

Modere’s philosophy is simple and straightforward: To offer clean lifestyle alternatives that will fit today’s modern landscape. For 30 years, Modere has been coming up with innovative products that set new standards for safer and cleaner living. These products have...
Read More

To increase your profit as a Modere independent distributor or social marketer, you should always aim to give the best products that Modere can offer to  your customers. Best-selling Modere supplements that you should deliver to your potential customers....