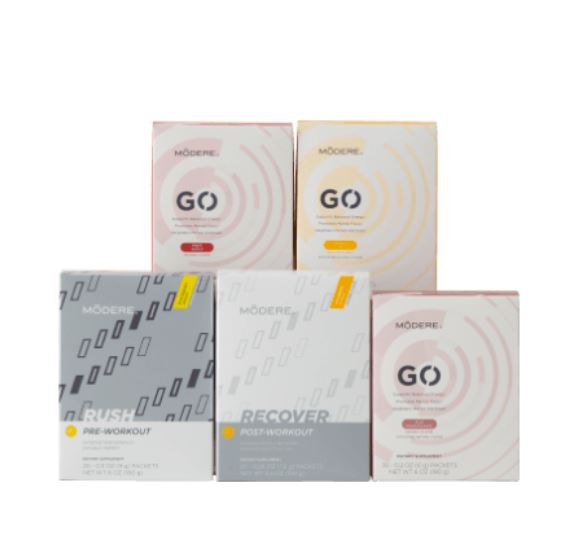 Modere is your go-to for clean beauty, health, and wellness products. As a direct-to-consumer brand, they effectively cut out the middle man and the price inflation that entails. Modere has been featured in Forbes Magazine and is ranked among the fastest-growing women-led businesses of 2021.

This brand is dedicated to science and developing clean, toxin-free formulations of all of your essential products. These can be compared to the top-ranking brands in the world. Modere products are EPA Safer Choice-approved, EWG Verified, NSF Certified, and Rainforest Alliance Certified.

The Modere GO Multi Pack + Fitness is an addition to Modere’s line of supplements that can be added to drinks. They include vitamins and superfoods that work together to boost energy and support healthy cognitive function. The variety pack includes Modere GO Açai Pomegranate, Modere GO Fruit Punch, Modere GO Orange Citrus, Rush, and Recover.

Before you purchase any kind of supplements for your health, it’s essential to know what ingredients make up the different formulas. Let’s break down each selection of the variety pack below.

Modere GO Açai Pomegranate balances energy while boosting mental focus and alertness. It’s a perfect supplement for that feeling of zen-like concentration to tick every single item off of your to-do list.

Prep for your sweat sesh with Modere Rush, the Modere pre-workout supplement. This scientific approach to a pre-workout boost doesn’t just fill you with jittery caffeine — you’ll feel invigorated with calcium HMB, beetroot juice, beta-alanine, and creatine citrate. These adaptogens work together to boost your performance, enhance blood flow, and improve muscle tone to blast through reps.

After you wrap up your workout, grab the Modere Recover blend to help your muscles fight cramps and recover more quickly to prevent soreness, as well as rehydrating your body. Featured ingredients include astaxanthin, l-glutamine, sour cherry, Indian frankincense, coconut water, and electrolytes. This formulation will help your body bounce back more quickly from even the most challenging circuits.

Together, this variety pack of drink supplements will have you performing at the top of your game, improving your athletic abilities, and building lean muscle in no time. Below, we’ll break down some of the more significant ingredients that feature in these mixes.

Nootropics may be a foreign concept to some—they are ingredients that enhance memory and other cognitive functions. Some common examples include ashwagandha, Rhodiola Rosea, and citicoline. Modere includes alpha GPC, a precursor to one of the most abundant neurotransmitters in the body, and is used to treat Alzheimer’s disease, dementia, strokes, and other illnesses that affect memory.

Shatavari root extract features in every blend that Modere offers in the Fitness variety pack. It’s a member of the asparagus family, as well as a popular adaptogenic herb. It has antioxidant and anti-inflammatory properties and may help boost your immune system as well. It’s also been known to relieve coughs and acts as a diuretic.

Modere utilizes a number of ancient Ayurvedic herbs, and Bacopa whole plant extract is a vital ingredient in their formulations. Also known as Bacopa monnieri, people have studied its effects on brain function and how it can treat ADHD symptoms, reduce stress, and relieve anxiety. It also has anti-inflammatory properties and can lower blood pressure.

Calcium HMB is one of the key ingredients of the Modere Rush pre-workout blend. Calcium HMB is even more productive than leucine at protecting muscles against protein breakdown during exercise. This muscle breakdown, and the release of lactic acid, is what makes you feel sore and tired after a workout. It promotes gains in fat-free mass, as well as more strength during training.

When you drink your Modere Recover after your workout, you are consuming astaxanthin. Astaxanthin is a reddish pigment that occurs in algae and gives salmon, shrimp, and other seafood their pink color. It’s an antioxidant that has been taken for years for a wide variety of ailments, including heart disease, stroke, diabetes, decreasing muscle damage and soreness after exercise, macular degeneration, and more.

So now that we have broken down the ingredients for each of these supplement packets, it’s time to determine whether they are worth your time. Modere is a company that relies on scientific investigation for all of its recipes. There aren’t any reviews available directly on the website, making it difficult to see how effective customers find the different drink mixes.

Modere Go Multi Pack + Fitness has been reviewed by a number of health and wellness blogs, with mixed results. Many are unsure if the price is appropriate for the amount of product you receive, but they had good things to say about taste and flavor. Many were uncertain of the caffeine content since there aren’t any percentages available for those ingredients.

Overall, this variety box is an excellent way to try out some of what Modere has to offer athletes. Their combination of ayurvedic, nootropic and scientifically-backed ingredients make it an exciting supplement to try, for sure.