Modere Go – Is It Safer Than Energy Drinks or Soda? 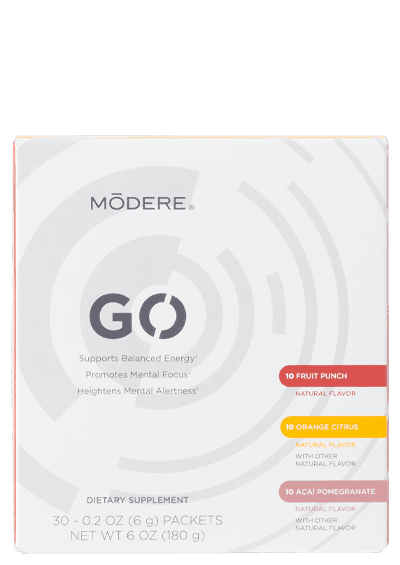 Whether you’re a student tired after a long day studying for a big exam or you’re a stay-at-home super mom exhausted from taking care of your newborn, sometimes you just need an energy boost. There are countless energy drinks, sodas, and caffeinated coffees to choose from, but what if you want to take a natural approach to energy and focus?

Many energy products on the market today are packed with synthetic caffeine, artificial flavors, and sugars that aren’t sustainable and leave you feeling jittery or lethargic. These ingredients can also be harmful to your body over time.

What is Modere GO?

Modere GO is a holistic energy supplement that consists of eight nootropics and 24 natural ingredients to improve your focus, promote balanced energy, support healthy cognitive function, and heighten mental awareness throughout the day.

Modere is a consumer goods company dedicated to developing clean, natural personal care and health and wellness products to benefit people and the environment. Since its founding in 2013, Modere has served over one million customers internationally, ranking #3 among Forbes’ Top 10 Health & Beauty eCommerce brands.

The company claims to back its health-conscious and environmentally-friendly products with science. Let’s take a look at what’s in the Modere GO – Orange Citrus supplement, the effects of its ingredients, what research says, and customer results.

What are the Effects of Modere GO?

How To Take Modere GO

According to the product’s instructions, you can take Modere GO by mixing one single-serve packet in approximately 8-12 fl oz of cold water. Shake or stir the mixture until it’s completely dissolved. It’s recommended to take between 1-2 servings per day, but you can increase the amount based on the results you’re seeing.

Overall, Modere GO is safe to consume and is similar to other natural supplements you can take. Modere focuses on using safer, natural ingredients in their products, so you won’t be getting anything synthetic like you would in certain energy drinks and sodas.

However, it’s essential to note your body’s reaction to the product, as everyone’s body is different and can have a different reaction to certain ingredients.

What Does Research Say About the Ingredients of Modere GO?

As of now, Modere GO’s can potentially improve performance, increase energy, and boost brainpower.  However this has not been confirmed by the Food and Drug Administration (FDA). Many of the key ingredients listed below also have limited research on their effectiveness.

It also includes many ingredients commonly seen in other natural supplements, such as: Vitamin A

Some of Modere GO’s key ingredients include:

Ginkgo leaf extract has been used in traditional Chinese medicine for centuries and is commonly used for its brain-boosting powers to improve memory, focus, and increase attention span.

A product is only as successful and effective as customers say it is. However, after an extensive online search, we discovered no customer reviews to be found for Modere GO (at least not yet).

Still, their other products (like Modere Trim, M3, and others) have harbored many reviews, which vary from super positive to highly negative.

One mom from California said:

“Great products. Everything I have tried works great. Fabulous for those with skin sensitivities. Safe products that don’t harm my family or the environment!”

While another customer raves about Modere products:

“I love the products and customer support. Well, I joined Modere as a customer. But I fell in love with the products so decided to start referring new customers. I like that they have a way for customers to earn free products.

“I have found the quality is great and safe for my children. Plus they save me money since it is shipped straight to my door. It greatly cuts down the time I have to spend at the store.”

However, there are many other negative reviews for their products as well.

While Modere has over 27 years in the industry and an impressive resume, it still lacks complete research on its ingredients and customer reviews for this particular product. It’s possible that Modere GO hasn’t been available long enough for customers to start seeing results and submitting reviews. It seems at this point only time will tell.