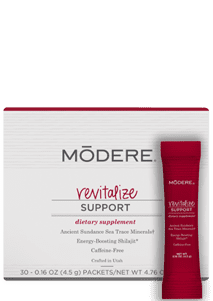 As if that’s not enough, Revitalize also supplies fulvic acid from Shilajit, an ancient herbal substance rich in minerals, which plays a vital role in improving the body’s bioavailability or the ability of your body to absorb the minerals you take in. All this is packed in a tiny 4.5g packet that you can easily carry around with you to transform any water you drink into a berry-flavored, supercharged, mineral-filled drink.

Is It Safe Energy?

Probably the first and obvious question that pops up in your mind is, how safe is this product?

Modere Revitalize is generally safe for human consumption and functions similar to other supplements.

The ingredients used to make it are non-GMO and gluten-free. Therefore you should have no issues if you happen to be gluten intolerant. It is also made from vegan-friendly ingredients.

For those concerned about the BPA levels, Modere Revitalize is entirely BPA-free. There are also no added sugars or caffeine to the product. It is simply a convenient single-serve stick pack to promote your daily energy levels.

That being said, you should pay attention to how your body responds to the product. If by any chance you feel nausea or any other adverse side effects, stop using the product.

Modere Revitalize offers several key benefits that are attributed to its ingredients. The first and most noticeable benefit that you’ll discover is an increase in your water intake on using the product.

The key ingredients found in Revitalize are shilajit, sea salt, zinc, iron, vitamin B2, B3, and B6.

Apart from these main ingredients, other ingredients used include citric acid, natural flavor, fruit and vegetable juice, potassium citrate, riboflavin, niacin, and copper gluconate. These additional ingredients supplement the main ones and are responsible for the trace minerals found in the product.

Here is a more in-depth look into the main ingredients of Modere Revitalize that will show just how they work to benefit your body’s daily functioning.

Shilajit is a blackish-brown powder or an exudate from high mountain rocks. It’s sometimes referred to as Mumijo. The shilajit used in Revitalize is obtained from the Himalayas and has fulvic acid, which is a potent antioxidant and anti-inflammatory.

It also has over 84 minerals, one of which is iron, and thus can gradually increase iron levels and the levels of other minerals in the body. This has the effect of improving the user’s blood chemistry.

While research on the benefits of shilajit is limited, some preliminary studies suggest shilajit could have the possibility of offering certain health benefits. These benefits include blocking the buildup of tau, a protein that forms neurofibrillary tangles and is a crucial indicator of Alzheimer’s disease.

Sea salt is mainly comprised of sodium chloride, which has essential roles in the body. It specifically helps to regulate fluid balance and blood pressure in the body. Having low levels of sodium in your body may easily result in dehydration, especially during high-intensity exercise.

Zinc is a crucial micronutrient found throughout your body. It is the second most abundant mineral in the body after iron. As such, its inclusion as a key ingredient in Modere Revitalize is no surprise. Zinc plays a vital role in improving your body’s metabolism function and immune system. Revitalize has a zinc amount of 3.6mg per serving.

Iron is an essential mineral in our bodies and is the most abundant as well. It is required in many bodily functions, such as helping our body store and use oxygen. It is also a significant component of most proteins and enzymes found in the body. A good example is hemoglobin, which is a protein that transports oxygen from the lungs to all other parts of the body. The product has an iron composition of 0.8 mg.

Vitamin B2 is also known as riboflavin and is one of the eight types of B vitamins. It is crucial for the breakdown of food components, absorption of other nutrients, and maintenance of tissues. With a riboflavin composition of 0.15mg, Modere Revitalize is an excellent source for riboflavin since your body only stores it in small amounts, yet it is needed daily.

Vitamin B3, also referred to as niacin, nicotinamide, or nicotinic acid, is another type of vitamin B. It’s also called vitamin PP because it prevents pellagra. It helps the body use proteins and fats by breaking down food into energy. Like vitamin B2, niacin isn’t stored in the body, and excess is excreted in urine by the body. Revitalize has a niacin composition of 1mg, which is just right since high doses can result in adverse effects such as nausea and vomiting.

Vitamin B6 is the last remaining type of vitamin B that is included in the Modere Revitalize. It is also referred to as pyridoxine. It is vital in protein, fat, and carbohydrate metabolism and the creation of red blood cells and neurotransmitters. Revitalize has a composition of 0.4mg. This amount is just right because, like niacin and riboflavin, the body does not require a hefty dose of this vitamin.

Modere Revitalize is primarily enjoyed and appreciated by consumers who have used it. Here’s what some of them had to say:

Becky Wagner “Love revitalize. …the berry taste has me doubling my water intake and I’m getting so much more with the macronutrients! Delish!”

Vincent De Cook “It started with one product, the toothpaste, and now my house is full with safe products. Mōdere quickly became my favourite brand and I’m so happy that I have found them. Meanwhile many members of my family started using them too with same great results. Thank you Mōdere !”